Getting involved with the Print Studio 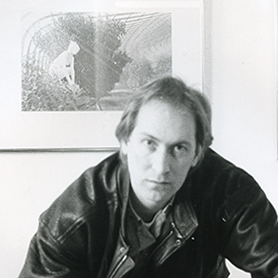 JM: So I had heard that Glasgow Print Studio had opened up and eh, of course being from Glasgow and my family living - my parents living here, I came back and I printed some etchings and this was 1976. The Print Studio had just moved from St. Vincent Crescent to Ingram Street and I believe I may well have been the first person in the place to make an etching, back in 1976, or to print an etching in the place, it had really just literally opened its doors. So that’s how I first got involved eh, and I was travelling back and forward to make prints for this exhibition, in - it was the Thumb Gallery in London, which I did and I got on very well with the people who were here, including Director Calum MacKenzie. And from that I was invited to make a publication, one of the first publications for the Print Studio. They had some money from the Scottish Arts Council, other workshops in Scotland had this as well, to make prints with- and each had the title of ‘Rite of Spring’. So I came to make that print and eh, what I did in the end was I- I based it on a photograph I’d taken of my wife, Sue, stood outside an art deco building in Newcastle, with a fan window and I made, it was quite a small etching, quite sweet. I didn’t know at the time but my- Sue was in fact pregnant, wasn’t showing yet, but- so it seemed to fit pretty well with the rite of spring. So, having done that sometime later, Elspeth Lamb at that time was the- taught the evening classes and worked at the Print Studio, I think she worked a couple of days a week and I was invited to take over her classes teaching etching, even though I lived in Newcastle. So I did this for a while, of course, I’m not really sure, I guess I must have been paid for two days a week, and I did two nights evening classes as part of that. And I would drive up from Newcastle, sometimes even hitchhike from Newcastle to do the class, cause I don’t imagine I got paid very much at the time. So that was the early introduction, so I did that for some time until eh, I was offered a full-time job under a job creation scheme, so it was government funded. And this was enough for me to accept the post and move to Glasgow with my wife and young baby daughter, who would be less than a year old perhaps at the time.

KP: So what kind of time was this?

JM: That would be seventy-eight, seventy-nine maybe. Probably seventy-nine. Aye, so, yes, so I was the basically the etching technician. At that time was a- the Workshop Manager was George Doherty, who left to get a job in Dundee. And, eh, so I was offered his job as Workshop Manager, which would be, again, maybe nineteen-eighty, eighty-one thereabouts. So I did that for some time and then Calum MacKenzie was Director, Catriona Clark was the- came in as the, she was kind of the Exhibition Officer, or Administrator, maybe a bit of both. But then there was, we had troubles, some problems with the Director and the Chair who didn’t see eye to eye. And there was a kind of clash of personalities, major clash.