Issues in the workshop with toxic photo etching chemicals, and changing processes 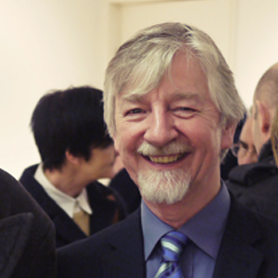 HM: Yeah, well, health and safety just wasn’t a concept at all. When er, I got onto the photo etching [course], we were using this stuff which was hazardous to your reproductive organs. And er, lots of other dangers with it as well. And once you’d coated it and exposed it, you washed it out in water. And it just all ran away into the, just the normal drains and ended up in the water table somewhere. So that’s what we were doing and the place was covered in the dye and the smell. And when you did screenprinting as well, all the solvents. If you’d a day in the Print Studio, then you went for one pint… you were [laughs] absolutely legless! It was just, just [sniffs] all these fumes! Yeah, health and safety, that wasn’t a concept at all. And that in fact, it was health and safety that ended the photo etching process that we were doing, drove me on to polymer plates because the Print Studio just could not afford at the time to install all the necessary extractor fans and deal with all the waste material to be taken away, it was just going to be so expensive. And the same applied to screenprinting. We couldn’t afford the extractor fans and again, the health and safety requirements - storage of the material and all that kind of thing. So that’s when we went to water-based screenprinting technology, and I went on to polymer plates and people went on to more user-friendly types of photo etching.

KP: Well, that’s interesting because I knew there was maybe slightly, an element of as manufacturers change processes, and maybe you know, from the manufacturing side, things maybe weren’t supplied anymore so that maybe drove a little bit of the choices about why people went for different methods in things like photo etching, but yeah that makes sense what you said about actually from our side, we had to have all of the equipment

HM: And there was a lot of resistance to it [laughs]. ‘Cause I’d spent, maybe ten, fifteen years and had actually perfected it, to my own satisfaction and I could predict what was going to happen and then suddenly had to learn a whole new technology. And people in the screenprinting weren’t happy initially because it was early days of water-based print, screenprinting technology and the paper was cockling, it gave them problems with registration and people weren’t happy but we couldn’t do anything about it, we had to stick with our decision, we just could not afford…. Then as now the Print Studio’s always been very strapped for money.