Attending the Ancient Marination and the Loveliest Nights of the Year 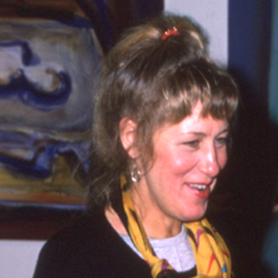 JP: There were a lot of events. But the social events… for the most part were fund- big fundraising efforts. And some of them, like the Loveliest Night of the Year, a very big fundraising effort, an annual event. So, erm… that was the main focus for our fundraising efforts at that time. And Calum was very imaginative about these. He wasn’t a printmaker as such, although he did make some very interesting prints. Erm… he was a painter by training, but he just had really good ideas all the time. The precursor of the Loveliest Night of The Year event was called ‘The Ancient Marination’. And that was a trip on the Waverley, ‘doon the watter’ [laughter], as they say! On a midsummer’s night. And it was terrific! And erm… you know everybody was in fancy dress and we sold all the tickets in advance. I remember, as the Waverley pulled off, pulled out in the middle of the river, suddenly there were two folk in really weird looking fancy dress standing on the edge of the pier, waving and shouting “come back! come back!” but of course the boat was already on its way by then, but I felt sorry for them because they weren’t with us and looking like that they couldn’t have really gone anywhere else either, [laughter] that night. So…

KP: So, he had lots of creative ideas-

KP: -about fundraising and the development-

JP: And the first Loveliest Night of the Year was at the People’s Palace in the Winter Gardens and I have to say, it was the most magical event. It was very elegant and, with a string quartet when you first went in. And then there were very other –[traffic noise outside] a number of other bands during the course of the evening and there were tables with food, really, very good food. And wine of course. Music, a lot more, you, know, different kinds of bands as the evening went on. And erm… everybody was dressed in full formal, dinner suits and tails and evening dresses and we always sold a lot of tickets in advance for those events. And they were al-always booked out in advance and so there was always, as I recall, an auction as part of the proceedings- auctions of art, holidays, carpets, I remember [laughter] and various other donated gifts. Erm… so that was quite interesting. They also would have at some point a ceilidh band, and a jazz band, and as part of - the earliest ones of those had really beautiful posters that were designed by Pat Jarvie. And printed by Johnny [Taylor] in silkscreen. And then, over the years we moved to other venues, we had, I think we had another one maybe at The People’s Palace, or two? And then erm… we were at the City Halls once, we were at Kelvingrove, I think a couple of times. One time we were at the Hol- what’s it called? The Holiday Inn or the Hospitality Inn [currently the Hilton Double Tree on Cambridge Street], really ghastly hotel. But that was one that made the most money. So that was the, I have to say that was the most ordinary venue, where we made the most money. Erm… and then, there were poetry readings, Glasgow poets. And John Byrne’s play, ‘Writer’s Cramp’, these were always happening in the Gallery. And usually as, we’d have a Christmas party and I can remember… Erm… Sue Mackechnie and Ellie [Lamb] and I, often making a lot of food for those Christmas parties. Erm… and then also had fundraising auctions in the gallery and I remember a couple with Russell Hunter, you know the actor? Which was just great entertainment and we managed to make some money too. [This is not a verbatim transcript of the interview but it was requested and approved by the interviewee]