Working hard and playing hard in the workshop 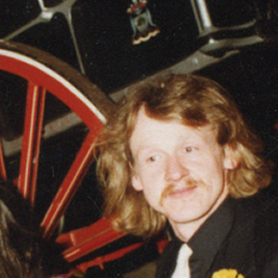 CS: And it was just…. suited my personality enormously. I’m a bit of a rough diamond, always have been. Um, and the way the Print Studio ran in those days was dangerously wonderful. I mean, it really was an interesting place to be. Um, I mean you can’t imagine the nonsense that went on there. I had a one man show with them actually in the late seventies... Paper structures and drawings, that’s what it was [noise outside]. And that was just after my first one man show at what was then called the Third Eye, which is now… can’t remember what the Third Eye is called now [The CCA]. Um, so a whole mixture of stuff. And it was bloody marvellous. I mean it really was, I mean we- well I anyway played hard, worked hard, drank a lot, and fitted in with the scene really quite well. Um, and there were some great people there, you know. I mean, Johnny Taylor, [Bruce] McLean did some printmaking with us. We did an edition for um, Nicholson’s wife- what was her name?

CS: Ghastly woman. No wonder Ben got rid of her. Um, and it- I mean it really seriously was. I mean, I used to go in six or seven days a week. My output was enormous; I mean really enormous. I was doing an edition a week.

KP: Of your own work or-

CS: Yes, of my own work. Yeah. But I would al- help, help Johnny and Calum print things for Bruce McLean, Winifred Nicholson as I’ve said, and a few other people as well. In fact, I just came across a Bruce McLean poster that he signed for me. Which was in my archive, you know. That must have been seventy something-or-other. Um, but it was things like the paper and the stock we got, right. Calum would go to auctions of printers that were closing down and buy up all the old trays and paper and everything, then we’d bundle it all in the lift and get it upstairs and-

CS: Printing presses and- I mean, we’re on the third floor. There’s this rickety old lift at the back, the goods lift as we called it. We had an amazing guy that operated it for the whole set of buildings, I’ve forgotten what his name was, but he was a real bloody character.