Getting Presses for the St Vincent Crescent workshop 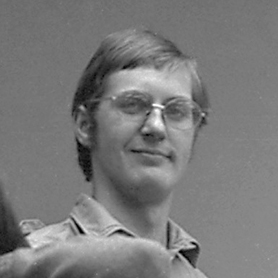 BB: We had nothing, really at the time we didn’t have anything. Beth Fisher was as good as her word and brought her press down. Phillip Reeves was buying a new press for the printmaking department at the Art School and he had a little proofing, etching press which he kindly donated. So that gave us something to start with.

KP: What kind of press was Beth’s one that she lent?

BB: It was an electric press, it looked actually quite fragile [both laugh]. It was motorised which we’d never heard of, but it was some kind of American design. I can’t remember the name of it or anything. But anyway, it was very welcome at the time. So, you know, we started advertising for members. We advertised for class - we held classes; evening classes, weekend classes. We just sort of built up over, over time. We thought it would be a good idea to get someone to be there permanently because most of us couldn’t be there permanently. For instance, I had to teach three days a week. Rob McInnes who was helping out with the screenprinting, he was in the same boat as myself. John Taylor was freer, so he was quite involved, certainly on the screenprinting side. The thing I think which took us longest to set up was our litho department. And eventually we got a press from somewhere, I can’t remember. But all these things had to be transported and manhandled and reassembled [noise from farming workshop] and I was quite involved with that. We even bought a press called a Golding Jobber from the Greenock Telegraph. The idea really was maybe to do some small books. So that came up from, from Greenock and we had to have a crane, and take the windows out, and hoist it out the window-

KP: In St Vincent Crescent this is? Yeah.

BB: -and with ropes and so on, eventually bed it down inside. We also… when the litho press came, we had to put H beams in on the floor to support the weight of it, it was so heavy.