Starting the Print Studio and the Rent-a-print Scheme 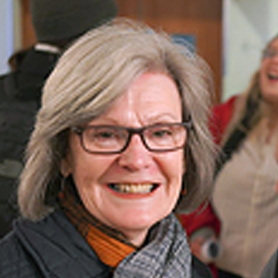 EM: It was happening during our final year at the Art School, I can’t remember the actual, you know, the first meeting but Phillip Reeves and Beth Fisher were involved.

CL: That’d be about round about nineteen sixty eight, sixty- ?

EM: It’s - no, it’s nineteen seventy… two would be my final- I was there from sixty eight to seventy-two so that would be my, during my final year at the Art School. And when I think about it now having made the choice of taking up etching I wanted to find out as much as I could but I didn’t really think at the time about what would happen after Art School, where we would be able continue with the printing. So it was really quite exciting when this whole thing started to come about and it was mainly the people who were in their final year, Post-dip at the Art School who were involved. I have to say it was good to have someone like Phillip Reeves and Beth Fisher there because you felt that they had knowledge and the expertise to lead us through this process, we wouldn’t, I don’t think the rest of us would have known how to go about it. And we obviously had meetings, I can’t remember particulars about meetings, but they would always be involved in doing things, seeing people and then we’d meet up and progress and there would be discussions about how to take things forward […] I think because I lived out in Cumbernauld I might not have been able to come into the premises quite so frequently but I remember being asked probably by Beth to, do a little bit about our rent-a-print scheme [for a leaflet] which I think is actually mentioned-

EM: - and I think each one of us donated a print which could be used and then obviously they were, they would collect more as time went on and I think they were also available for sale if people wanted to buy them, having had them in their homes.