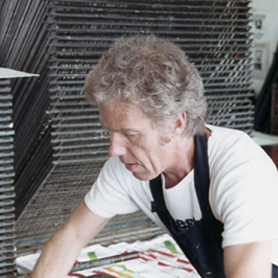 JT: I started there and Beth Fisher was on the committee. There was an American artist in residence, which was a total nonsense at that time considering how small the outfit was. There was then a possibility, they needed a manager. It’s not… it was never a Director it was always a ‘Manager’ in these days. And Calum was employed as a ‘Manager’ .Cause it has a different connotation, a different concept. So there was possibility that another American would be employed as manager and of course, I thought, ‘this is one American too far’. So I was arguing with Calum Mackenzie outside the Doublet bar. And I said “Listen, why don’t you apply for this job?” At that time he’d been involved in the Glasgow League of Artists, a kind of younger bunch like the Glasgow Group They were the older group, I was never a member of either. I said to Calum you apply, for the job and he did apply and he got the job. We quickly realised that we needed new premises. Calum,myself, Jacki and some of the other members of the committee looked at buildings throughout Glasgow during that time. One cracker we looked at was known as the Ozalid building, in Cowcaddens and it’s now turned into flats [16 McPhater Street, former warehouse, A-listed due to unusual construction material of concrete]. And it was for its time quite an amazing structure, with a preservation order on it. Well it was slowly just disintegrating. But that was one of the buildings we looked at and then eventually we got the one in Ingram Street. Which was ideal. [This is not a verbatim transcript of the interview but it was requested and approved by the interviewee]