Inviting Special Guests to the Loveliest Night of the Year 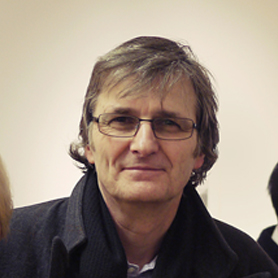 RF: Probably one of the more, er, serendipitous ones was when we spotted Geldof, Bob Geldof walking to Peter Howson’s gallery. Peter Howson had done work with us anyway, we knew Peter so we actually had a van load of stuff that we were moving between venues or something and a woman called Gwyneth Leech who was on the- that [Fundraising] committee, we spotted the pair of them so Gwyneth was sent off to chat up Bob Geldof and said “You coming to the ball tonight, or tomorrow?” So yes Mr Geldof came along-and er, sat there and watched and observed and didn’t stand up [laughter] Er but, yeah it was interesting, yeah. And others, we obviously - the local writers were obviously popular targets for us as well. Alasdair Gray obviously and Bernard MacLaverty and people like that who were local. And people would come along- yeah people liked coming along to spot celebrities.

KP: Yeah in the pictures were people like er Muriel Gray, err, Elaine C Smith as well, she was-

RF: Elaine did a sort of MC for us at one of them, yeah. She was very good at fundraising whenever a raffle wasn’t going very well, she was round and sold probably ten times as many tickets as anybody else [laughter] So yes, they got stuck in. It wasn’t a free night out, no such thing as a free Loveliest Night of the Year dinner [laughter].

KP: [laughter] So you really made them work.

KP: Erm, and so were there any um particularly challenges or difficulties that you remember from organising these events. Like what do you think was - anything that stands out?

RF: Well my- the one interesting bit of negotiation was, because we had stand ups at some of them as well so I- there was an act in nineteen eighty six I think, on the go called ‘Bing Hitler’ who some of you may not have heard of but that was actually Craig Ferguson who went on to do the ‘Late Late Show’ in the States. So I went along to meet him at the club after Mayfest - Mayfest was the big arts festival back then- so that was a good place to knobble people like that. So I went along and met with Craig and Peter Capaldi actually, unannounced - there was a spare Doctor Who! And tried to negotiate with him to get him down to less than a hundred pounds which is obscene! [laughter] But anyway I did because it was fundraising, to be told in no uncertain terms, and I can’t repeat the words here that [impersonates Craig Ferguson] “For less than a hundred?!” [laughter] So anyway, Craig came along and did his bit as Bing Hitler, it that was great, and that was when there wasn’t that much bad [colourful] language in [stand-up]. And then in fact one of our patrons on the night wrote us a letter saying he was shocked by the language and he’d brought his friends up from England to this wonderful arts world of Glasgow and was shocked! And of course we wrote him a very strong letter back to this man saying “Well sorry, but have you been out recently?” [laughter]