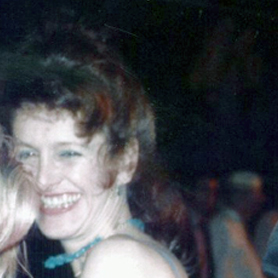 SM: John Byrne was one of the first. He uh, he was the first person I remember that actually worked at St Vincent Crescent. He’s the only one I think who was involved at that point. I think other people probably came in once they were in Ingram Street. But, I remember John coming up to - er, my mum had to come and look after the baby [laughs]. And I had to come down with John and I think Robert [Paul] did some of the printing. Beautiful prints. There was one of a big cow.

KP: I’ve heard about this and - but I’ve never seen a picture of it.

SM: It was a wonderful print. I remember John talking about, seeing somebody riding on a cow and it jumping [laughs] It’s just a really silly story but it was funny. He was always such um, good company.