His role in developing the workshop through his various roles 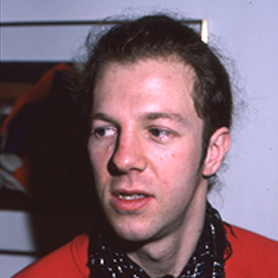 SD: I started off as the etching and the screen-printing tech, and then I was the etching studio printer, then I was the studio manager, then I was the studio senior etcher, and then I’d become the kind of etching master guy. So that’s five different roles as the organisation has developed. But some of them kind of overlapped in some ways and I suppose when I was still the etching tech or studio, yeah – it would have been the etching tech in Ingram Street days, John Mackechnie was already encouraging me to look at some of the aspects of the workshop that we could develop. Things like, developing the range of papers that we had, I was interested in developing the range of techniques that were, you know, being - coming to light throughout the UK and such. Erm, and I suppose when I became studio manager, though that was officially in 1989, I’d been doing that sort of job since Ingram Street days! And when we did finally close in Ingram Street – quite suddenly actually, in 1987, I’d already been thinking about the new workshop! John and I had gone and we’d looked at various premises and we had looked at the 22 King Street [current] premises. And I already had an idea in mind about how to develop a workshop, the actual physical space, and that was kind of my first kind of role with the development of King Street, the new King Street space. And I designed that space with the- I copied the requirements of both Murray Robertson and Johnny Taylor, needed to put into the whole project. And I think the other contribution that I made - well actually John said something which I was quite chuffed when he said it, it might be fifteen odd years ago he said something like… that he thought that my legacy, of my time when I was the studio manager - I didn’t think I had a legacy, but there you go - John says he thought my legacy of my time as studio manager was the huge leap forward in professionalism within the workshop. And I can see that with hindsight that might be the case because I, was interested in health and safety, I was interested in the technical aspect of printmaking, and one of the things I did was I started up the Print Studio -a journal called Printers’ Press and it wasn’t a newsletter, it was not like its predecessors in that respect. It was really, I felt, er… to be used as a tool for educating the members and bringing them on. And I used to kind of write articles and commission articles in the Printers’ Press, which would maybe deal with you know, the professional standards of print production, you know, not getting inky finger marks in the margins and you know, not to tippex them out or cover them up with a window mount, which used to happen in the old days, you know? And there was all sorts of things like that, er… [pause] and in actual fact I remember if it serves me right that I even had the British Library, the New York Central library took out associated membership with the Print Studio just to get their hands on this whenever it was published, every two or three months it came out. [laughs] Because it had articles like the legal aspects of Copyright, erm, you know all that sort of thing.