Getting introduced to the Studio and taking photography classes 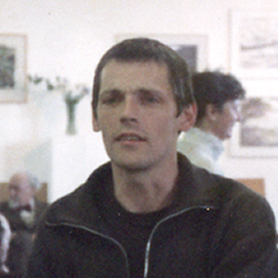 BH: Well, it was interesting because when my mates were going tae art school, at the time I was up and down to London and stuff, and doing different things. And when I come back I kind of got interested in photography. And er… a guy- a good friend of mine, I used to share a flat wi’ - sort of says “a darkroom, you could build one down the Print Studio!” I says “what’s, what’s the Print Studio?” “Och’ come doon, you know!” says the guy. So they’d a pottery in it, where it’s like the highest, highest ceramic workshop in Glasgow. Wooden floors and everything, big kiln an all in it. It wasnae kind of health and safety conscious. But I basically went down, was introduced to Calum, he says “what do you want to do?” I says, “I want to make a work- build a darkroom” he says “yeah no problem! Go upstairs, build one up there” and that was it. You know, it was like, so I just went up got stuff together, started building a workshop and I shared the studio which was about - I don’t know it was about ten, eight quid a week or something like that. Eight quid a month? But I never remember paying rent, you know what I mean? The rent is a kind of… it was, I mean these were the days where you could get an old building somewhere and do something without all the palaver… So that’s… and I started doing photography. And eventually I got a part-time job in the place. And, er I suppose the thing about, the thing I liked about it is that nobody told you what you couldn’t do, it was all about just doing things and without permission! But you know, try it see if it works, if it doesnae just apologise or something, you know there’s a lot of kind of nice... And I remember that, I wasnae working that long when Calum suggested I should do some evening classes, used to run evening classes on a Thursday evening. And I says, “yeah okay!” This was about Tuesday, and I was thinking you know I need to get things prepared and figure out what I’m going to do in the class and all this kind of stuff. And Thursday came, and he says “aw, you’ve got eight people!” And I’m like, I mean I was a total amateur… I was just learning the thing myself- I says “what? Tonight? Starting tonight?” you know, and he says [mimics grumbling] “yeah, you’ll be alright, don’t worry about it!” And I was terrified. You know, I- there was eight people there, and they were all dead excited about learning photography, darkrooms and stuff. And I was like… and where the darkroom was situated, you know, I would come out and, John Taylor and people would be doing screen-printing, and Dominic would be doing litho, so there was all these wee workshops going on. And I would go into the place and look at these eight people and jump back out the door again tae have a think! You know, after a couple of times I noticed the guys are going like [whispers] “he’s oot again” you know what I mean? So… giggling and all this sort of stuff, you know. And then eventually, I went in and I gave them the history of photography and everything I knew about in one night! They were like… “My God!” I didn’t expect to see them the next week, but they did come back, I think there was more came back the next week[laughter]. But by then I had got my act together and started. So, it was a case of just being one step ahead of your students, or whatever. But that’s what I really enjoyed about the place. It was automatic, and you did what you wanted to do