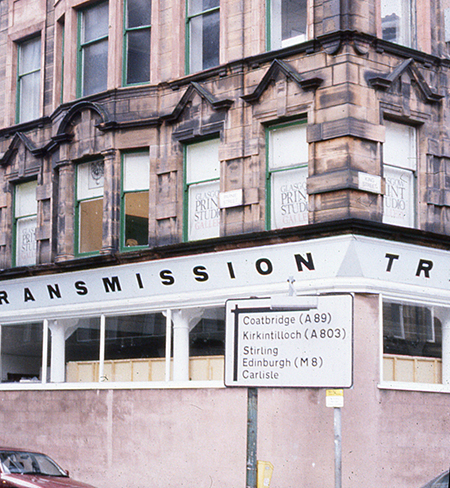 Image: Exterior of the Gallery at 22 King Street shortly after moving in

After the short notice move from Ingram Street at the end of 1987, it took a few months before the organisation was fully up and running. The first exhibition in the new gallery space was Adrian Wiszniewski’s Mayfest 1988 show – a showcase of recent paintings with the first showing of prints made at the Print Studio. The workshop was fully open by the summer. Although smaller than Ingram Street, it was kitted out with three screenprint beds, three intaglio presses, two lithography presses and the iconic Columbian Eagle relief press. Across the road was a retail space, the Original Print Shop.

The stage was set for the bumper year of 1990, when Glasgow received international attention as the European City of Culture. An increase in funding meant that the Gallery was able to secure big name shows, like American Master Prints from Washington's National Gallery and Colquhoun and MacBryde, and with the support of an Exhibitions Officer (Janet Simmonds then David Reed) loans and exhibition administration could be coordinated, and the exhibitions well supported with marketing and catalogues. The Mayfest show for 1990 was ‘Peter Howson Paintings & Prints’. Having worked in the Print Studio for several years at this point, Howson was a confident printmaker in etching, lithography, monotype and woodcut, and was attracting international attention for his paintings. In addition, print sales that year were strong, with the Print Studio exhibiting at New York’s Mary Ryan Gallery and in the Festival Hall in London.

1990 saw an increase in international visitors to the Workshop, supported by an official artists exchange and boosted by the raised profile of the organisation. This was of great benefit to the membership, as was the introduction of the ‘Artist of the Month’ featured shows in the Original Print Shop, which gave members an opportunity to have their work showcased. This monthly feature opportunity is still an important part of the Gallery’s calendar.

The Graphic Impact project covers the period 1972 to 1989. To find out more about Print Studio publications and facilities after this date, and currently, please visit www.glasgowprintstudio.co.uk.